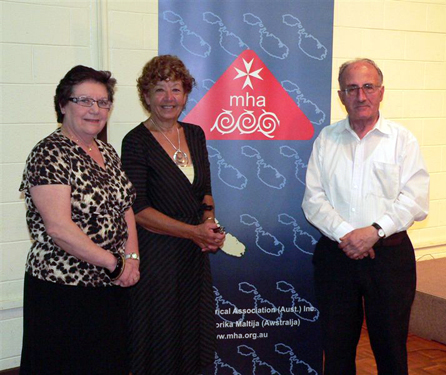 On Tuesday 21 February, the Maltese Historical Association  (MHA) organised the launch of this new book Beloved Convict by well-known author, Dr Lou Drofenik.  This is the fifth of her novels which have well received by the community both in Australia as well as in Malta, where she was recently given the prize for the best book written in English by a Maltese person.

The president of the MHA, Mrs Frances Bonnici opened the meeting, giving a brief outline of Lou’s background and publishing career. She stated that it was an honour for the MHA to publish this book which is based on a historical personality, based on  the discovery by the author that a Maltese was condemned to 14 years hard labour in Australia, arriving in 1820.

This was followed by a talk by Prof Maurice Cauchi who launched the book. In his speech, Prof Cauchi emphasized the historical background around which this novel is built. It starts at the time when the Knights of Malta were at their lowest ebb, following by a short but dramatic upheaval created by the arrival of Napoleon and the French, and finally, the British rule which lasted over 150 years.

Dr Drofenik described her passion for writing and in particular the excitement she felt when ,in her researches she came across his Maltese fellow who ended up as a convict.  She described the various threads that stimulated her research and which have resulted in this historical novel.

The launch, held at the Maltese Community Centre in Parkville was very well attended. It was followed by a reception for the guests.