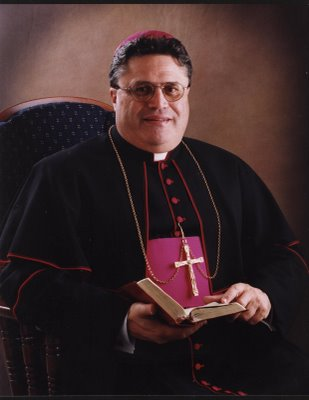 The Maltese community in Australia was shocked to learn that Bishop Joseph Grech passed away on 28 December 2010 at St Vincent’s Hospital in Melbourne aged 62.

The Most Reverend Joseph Angelo Grech was born in Balzan, Malta, on 10 December 1948. After finishing his first four years of priestly formation at the Seminary in Malta, he arrived in Australia in January 1971 to complete his studies. He continued his studies for the priesthood at Corpus Christ College Glen Waverley and Clayton and was ordained at his birthplace in Malta on 30 November 1974.

Following his ordination, Fr Grech returned to Melbourne to take up parish appointments in Northcote, Altona North, Maidstone and Moonee Ponds and as Parish Priest in Brunswick East. In 1989 the Archbishop of Melbourne sent him to Rome to pursue further studies in Spirituality at the Gregorian University. In 1993 he was appointed Chaplain to the Catholic Charismatic Renewal for the Archdiocese of Melbourne, an office he held until 1996, and in 1997 he was appointed Spiritual Director at the Corpus Christi College Provincial Seminary in Melbourne.

On 27 November 1998 Fr Grech became one of Australia’s youngest bishops, when he was appointed Auxiliary Bishop for the Western Region of the Archdiocese of Melbourne. The Maltese community was overjoyed with his appointment as Auxiliary Bishop and packed St Patrick’s Cathedral in Melbourne at his installation on 10 February 1999.

On 8 March 2001 Bishop Grech was appointed Bishop of Sandhurst by Pope John Paul II and on 27 April 2001 he was installed at Bendigo’s Sacred Heart Cathedral in the presence of a large number of Maltese who joined a large crowd of local residents in the celebrations.

Bishop Grech was also appointed Bishops’ delegate for youth, young adults, migrants and refugees. He had a passion for safeguarding the interests of the underprivileged and related extremely well with young people and recent arrivals from refugee camps, who sought to make their home in Australia.

Bishop Grech was blessed with a very engaging and charismatic personality and people became aware that he was a man with a big heart and a caring nature. He was a person with a great commitment to the teachings of the Gospel and an inspirational speaker who never failed to get his messages across, particularly to the young. He often publicly spoke about the religious values which Maltese migrants brought with them to their country of adoption, the value of the family unit and the importance of observing our religious beliefs. Addressing young people on one occasion he said: ‘God doesn’t make rubbish! There is good in all of us and we just have to take time to find it.’

Bishop Grech gave great spiritual leadership to everyone, especially the Maltese in Victoria. He maintained a close relationship with the Maltese community and regularly attended religious functions, the last of which was the blessing of the facial sculpture of St George Preca at its installation at the Maltese Community Chapel in Parkville on 20 February 2010.

All the Maltese youth who were in Melbourne while on their way to the World Youth Day in Sydney in 2008 will recall his invitation to them to join him at the Bendigo Cathedral, when he concelebrated Mass with the Archbishop of Malta, His Grace Paul Cremona.

It is in keeping with his character that only some weeks ago, following his attendance with a group of parishioners in Rome for the canonisation of St Mary MacKillop, he should return to Malta to be part of the ordination of Fr Robert Galea, whom he had mentored while attending at the Seminary in Bendigo.

It is extremely hard to believe that he is no longer with us, but we are all better people for having been associated with him. He has always been a valued member of the Maltese community in Australia. He will be sadly missed but never forgotten. May he rest in peace.

The MCCV and its affiliated associations extend their sincere condolences and deepest sympathies to the Grech family.