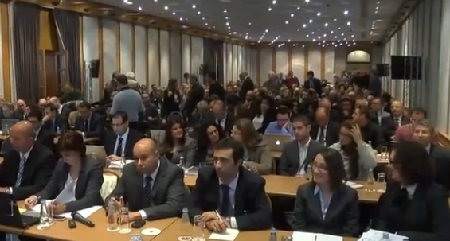 NEWS   The Malta Environmental and Planning Authority (MEPA) yesterday approved all necessary planning permits for the Delimara LNG power station project after an eight-hour-long marathon meeting. All but two of the eleven board members voted in favour of the two permits: one for the gas-fired power plant and re-gasification unit and the other for a floating jetty and ancillary facilities. The two board members who voted against the project were PN MP Ryan Callus and Alex Vella from the Ramblers Association voted against.
A few minutes earlier the board turned down a motion filed by Mr Callus calling for the postponement of the vote until after a Maritime Impact Assessment is carried out and until the Papadakis report is updated with the relevant data. The motion was seconded by Mr Vella.
The decision, which was met with a round of applause by members of the public, came after the longest ever MEPA board meeting, which was characterized by bouts of insult hurling, booing and shouting at anyone who spoke against the project. MEPA chairman Vince Cassar struggled to try and keep order and at one point had to call in the police to remove a man who had called Mr Callus a “pulcinell”.
PM told MEPA works would proceed regardless of appeal
The meeting kicked off at 10am with the MEPA chairman reading out a letter sent by Prime Minister Joseph Muscat saying that, if the project was approved works would carry on even if an appeal was filed. Later on during the day MEPA lawyer Robert Abela explained that this did not mean that there was not right to appeal but noted that, nonetheless, there were no registered objectors, so no one was actually eligible to appeal.
In a statement the Office of the Prime Minister said it wanted the application to be processed and decided upon by MEPA according to the law while adding that nobody intervened in the application process. The prime minister said that “now that the decision will be taken by Mepa’s board according to law, the same law makes it clear that works cannot be halted in the event a suspension of the works is sought from any interested party during the period of appeal and this is due to the fact that the development is one of strategic importance.”
The full statement issued by the Office of the Prime Minister in Maltese on the day of the MEPA hearing reads as follows: