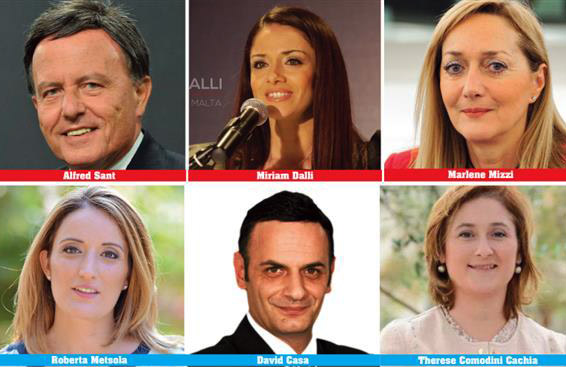 NEWS   For the first time in three European Parliament elections since Malta joined the European Union in 2004, the Nationalist Party (PN) managed to win more than two seats. Also for the first time, Malta will have four women representatives at the European Parliament, two from each party, and by more women MPs than men. Dr Roberta Metsola was the first woman to be elected directly, and she was followed by three other women.
With three Labour candidates, Alfred Sant, Miriam Dalli and Marlene Mizzi, and two Nationalists, Roberta Metsola and David Casa, having already been elected, the last seat was still up for grabs after more than 66 hours of counting. On the 28th count, Nationalist candidate Therese Comodini Cachia grabbed the third seat for the Nationalist Party, beating Labour candidate Clint Camilleri by a mere 206 votes.
Speculation had been rife that the PN had made it by a whisker, and when this was confirmed, there was the usual banging on the perspex separating the agents from the counting section in the hall. To this, Labour Party agents replied with shouts of Viva l-Labour. Labour won a landslide victory in terms of votes. But, with the current complicated single transferable vote system, the PN had the consolation of grabbing a third seat in spite of obtaining about 32,000 votes fewer than Labour in the election.
When the Electoral Commission published the official result – the 28th and last count – Therese Comodini Cachia finished with 29,580 votes against Clint Camilleri’s 29,374.
Marlene Mizzi, on the other hand, was elected as the fifth MEP. Like Dr Comodini Cachia, Mrs Mizzi did not reach the quota, netting 35,630 total votes, just 69 short of the line. But, nonetheless, she retained her seat.
Therese Comodini Cachia had surpassed Francis Zammit Dimech when Ray Bugeja was eliminated. Dr Zammit Dimech was eliminated too and most of his votes went to Dr Comodini Cachia, whose number of preferences nearly doubled.
The other elected candidates are Alfred Sant and Miriam Dalli for Labour, and Roberta Metsola and David Casa for the PN. Mr Casa is the only MEP to have been elected in all three elections since 2004.
While the PN’s outgoing MEPs were both elected (Dr Metsola and Mr Casa), Labour has two new faces in the line-up. Dr Sant and Dr Dalli replace Joseph Cuschieri, who failed to be elected, and Claudette Abela Baldacchino, who did not contest.
[Source and photo: www.independent.com.mt]
Previous
Labour government in Malta wins a landslide victory in Euro election
Next
Outrage about proposed race law changes forces Brandis to rethink