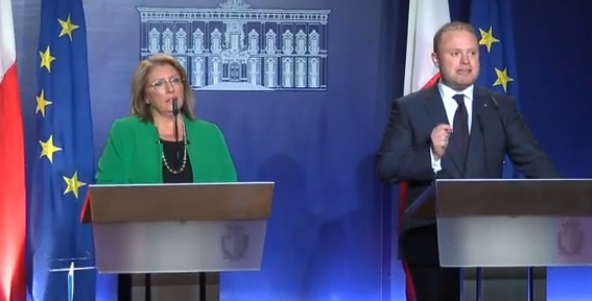 NEWS   Confirming recent speculation, Prime Minister Dr Joseph Muscat officially announced at a press conference on Tuesday the nomination of Family and Social Solidarity Minister Marie-Louise Coleiro Preca as Malta’s next President, the ninth since the country became a republic in 1974.
In making his announcement, the Prime Minister also revealed that the next President will have a greater role to play and will be given responsibility over issues which fall under her current ministerial portfolio.
Dr Muscat acknowledged that Ms Coleiro Preca was initially reluctant to accept the post, thanking her for doing so as he was aware that it was no easy choice to make. He insisted that the appointment should not be seen as the loss of one of the government’s best ministers – even though he acknowledged that this was the case – but as the country gaining a new president.
The prime minister emphasised that Ms Coleiro Preca would have to oversee important events, including the upcoming constitutional convention and Malta’s EU presidency, and would have to build on the great work of her predecessor.
He also emphasised that the presidency would be far from a ceremonial role, and that Ms Coleiro Preca will face greater responsibilities: she will be in charge of the National Strategy against Poverty and Social Exclusion which her ministry has drafted, along with the EU food aid programme, the National Family Commission, the National Commission on the abuse of Drugs, Alcohol and other Dependencies, the Commission on Domestic Violence and the LEAP anti-poverty project.
The resources allocated to the Office of the President are set to increase in kind, with Dr Muscat pledging that the new President would receive the funds and human resources necessary to ensure her work is effective.
Ms Coleiro Preca is presently already politically responsible for the entities and initiatives listed by Dr Muscat: she will effectively be keeping part of her ministerial portfolio as president.
The Prime Minister said that Ms Coleiro Preca’s appointment brought Malta “one step closer to the birth of the Second Republic” and insisted that since an energetic person was required to meet the requirements of the role, he felt the need to break with tradition and not play the political game to appoint someone at the end of their political career.
Dr Muscat insisted that he did not want the presidency to be seen as a “retirement prize,” even though he acknowledged that presidents did not tend to view it in that manner. At 55, Ms Coleiro Preca will be the youngest person to be appointed president.

The Prime Minister was full of praise for Ms Coleiro Preca, stating that she had unprecedented success as a woman in a male-dominated political scene. He said that Ms Coleiro Preca would be the country’s “social soul,” and stressed that he expected her to draw the government’s attention – even publicly – when necessary.
In her address, the minister insisted that she did not deserve all the accolades that were being attributed to her, and acknowledged that she had never imagined becoming President. She noted that it was not her aspiration to become Malta’s head of state: her aspiration had always been to serve the public, and she pledged that she would continue doing so in her new role.
Ms Coleiro Preca stressed that it was important to ensure that social issues – which, she pointed out, were often sidelined – were given the highest profile possible, and insisted that the fight against poverty could not be won by government alone.
She dismissed claims that she would consider refusing to sign the Civil Unions Bill, pointing out that she never spoke against it and that she was a part of the government which backed the law. She added she could not imagine how certain comments were made.
Dr Muscat confirmed that Ms Coleiro Preca will stay on as minister until she is appointed President, stating that she needed to close a number of dossiers before moving on. He also said that the minister would be announcing one of the greatest social measures in Maltese history in the coming days.
Opposition’s reaction to the nomination
Earlier in the day, Dr Muscat had met Nationalist Party leader Simon Busuttil to officially announce the government’s plans, but Dr Busuttil was far from pleased with the outcome, lamenting that the opposition had not been consulted, but presented with a fait accompli, with Dr Muscat simply stating what the media was already reporting.
In a statement, the PN accused Dr Muscat of resorting to political manoeuvres even during moments of supposed national consensus.
Whilst wishing Ms Coleiro Preca well, it said that it would only announce its position on her nomination after it is discussed during the next meeting of its parliamentary group.
Ms Coleiro Preca will be the second woman to be President after Agatha Barbara, who served between 1982 and 1987. She will also be the second consecutive one from Qormi when she succeeds George Abela on 4 April.
New President will ‘join forces’ with Parliament
On Wednesday Presidential nominee Ms Marie-Louise Coleiro Preca said that she will be joining forces with Parliament in order to ensure that legislation passed through the House will go towards improving people’s lives.
Ms Coleiro Preca said that there will be no overlap with the Social Solidarity Ministry as her role will be that of policy recommendation.
“It is one thing going to Parliament with legislation, it is another thing working on that legislation and preparing it to be taken to Parliament. If we can join forces, and this is what we are going to do, we can ensure that the tools which we are going to give to people will offer them the best way of life possible.
“If we can ensure that that legislation is really representing all people’s aspiration then we are really doing a job, and this is what the presidency will do,” Ms Coleiro Preca told The Malta Independent.
Ms Coleiro Preca expressed herself to be in favour of a referendum on Constitutional reform.
“Let us take all the necessary steps. We are committed as a party to bring about the second republic and updating the Constitution.”
“The Constitution develops, we are a young democracy and are still developing, so we should update the biggest tool that the population has to assure the best possible democratic environment,” Ms Coleiro Preca said.
She said that she is expecting a national debate on the reform, and she wants the debate to include everyone, including children.
Ms Coleiro Preca rubbished claims that there is animosity between her and foreign affairs minister George Vella, who was initially touted for the post. She also scorned any doubts that she will not sign the ‘gay marriage’ bill as President.
President’s unclear role: perfectly legal, says PM
The Times of Malta newspaper reported today that, with the extent of the new President’s powers yet to be clarified, Prime Minister Joseph Muscat has insisted that putting her in charge of numerous commissions is “perfectly legal”.
Marie-Louise Coleiro Preca will, as President, still head several commissions in the social field and remain responsible for the national strategy against poverty, both of which are now within her portfolio as Social Policy Minister.
The commissions of which she will be in charge are not mentioned among the president’s constitutional roles.
Dr Muscat brushed off the suggestion that Ms Coleiro Preca would be retaining part of her ministerial portfolio, saying she would only be asked to lead a strategy on a nationwide policy.
“We sought advice and were told there was nothing wrong in the government delegating the overview of these systems to the president.”
He argued the nature of the other entities she would be in charge of were such that the distinction between the executive arm of the government and the presidency would be maintained.
[Sources: www.independent.com.mt and www.timesofmalta.com]
Previous
Prominent Maltese community member passes away
Next
Maltese citizens travelling to UAE will not need visa