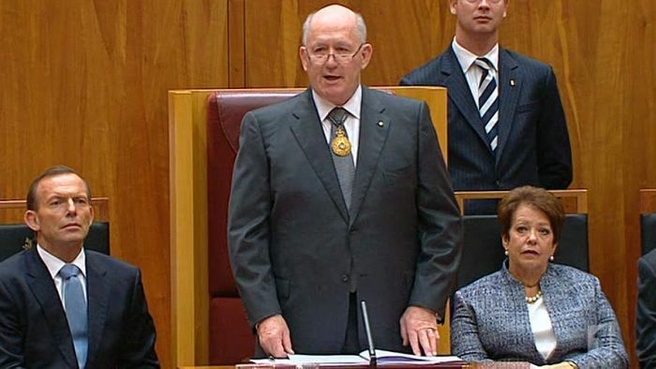 H.E. Sir Peter Cosgrove in the Senate Chamber at the swearing in ceremony with Prime Minister Abbott on his right and his wife Lady Lynne Cosgrove on his left. [Picture: ABC]

NEWS   Yesterday Sir Peter Cosgrove was sworn in as Australia’s 26th Governor-General, declaring it “the greatest honour” of his family’s “fortunate lives”. The former Defence chief is the first man to be knighted under Prime Minister Tony Abbott’s revived honours system.
Sir Peter used his swearing-in address in the Senate today to pay tribute to Indigenous Australians, his predecessor Dame Quentin Bryce, and Cameron Corporal Baird – the special forces commando who was posthumously awarded a Victoria Cross in February this year. “We hail and salute Cameron Baird,” he said. “He lives in the injured hearts of those he left too soon.”
His Excellency General the Honourable Sir Peter Cosgrove, as he is now known, wore his string of military medals when he arrived at Parliament House in Canberra in a motorcade.
Moments after being sworn in before Chief Justice Robert French, he told parliamentarians, diplomats and the partially filled public galleries that he was “humbled and proud” to be assuming office and came to the role “agenda free.”
“To think that I will play some part in the public discourse extends to me, my wife and family the greatest honour of our fortunate lives,” he said.
He said he would seek to “reflect” the community, saying his work as Australian of the Year in 2001 had prepared him for the work ahead.
“I pledge all of my energy and goodwill to all of the tasks of Australia’s governor-general, not least those working within the wider community,” he said.
Indicating that his spouse will play a high-profile role, the Governor-General said his wife, Lady Lynne Cosgrove, would be listening to Australians alongside him.
“My wife and I will be attentive to any and all agenda that we encounter that sit within a broad and fundamental set of Australian values,” he said.
A 21-gun salute fired as the Governor-General’s speech came to a close and His Excellency’s Standard was unfurled.
Prime Minister Mr Tony Abbott welcomed Sir Peter at an official reception for the new Governor-General and his wife. “You will be a knight for rolling up your sleeves and getting on with things,” Mr Abbott said.
“Every human being wants to be uplifted and inspired and I can think of no better man than Peter Cosgrove to maintain our national morale and to find faith in ourselves.  I know, Sir Peter, you will approach this work with respect, discretion and judgment, and our government and our country will be the better for it,” said Mr Abbott.
Opposition Leader Mr Bill Shorten described the Governor-General as a person who “has the ear” of Australians. “Your Excellency, rest assured that when a Governor-General speaks, Australia will listen,” he said. “We look to you as a guardian of our constitution, a representative of the values and the love of country that we all share.”
Hours of pomp and ceremony began with the Prime Minister and his wife, Margie, greeting Sir Peter and his wife in front of Parliament House.
Sir Peter was applauded as he walked through Federal Parliament’s marble foyer shortly after receiving a general salute from a guard of honour on the Great Veranda. He was escorted into Senate president’s private suite before entering the Senate, which was packed with MPs and senators. Parliamentarians stood as the Usher of the Black Rod led the governor-general designate into the Senate chamber.
Sir Peter came to national prominence in 1999, when he was appointed commander of the international peacekeeping mission in East Timor. He was appointed chief of the Army in 2000 before being appointed chief of the Defence Force in 2002. He was Australian of the Year in 2001 and retired from active service in 2005. In 2006, Sir Peter led a taskforce to rebuild communities in Queensland devastated by the category-five Cyclone Larry. Since retirement, he has worked as a non-executive director of Qantas.
[Source: Article by ABC political reporter Latika Bourke and staff www.abc.net.au] See also articles about the new Governor General:
Previous
President Abela refuses to sign Civil Unions Bill
Next
Federal government announces controversial race law changes