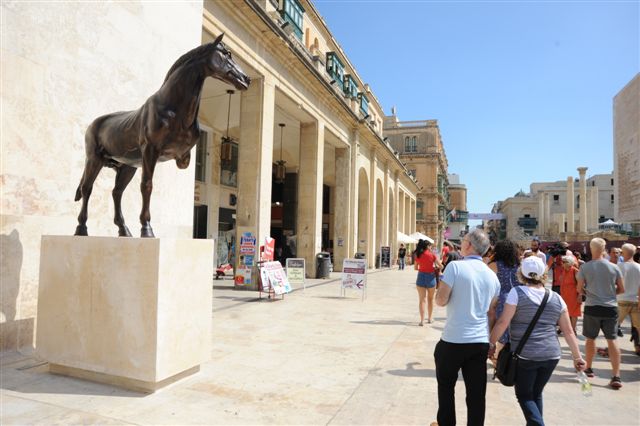 NEWS   Minister for Justice, Culture and Local Government, Dr Owen Bonnici inaugurated  – the Valletta International Visual Arts (VIVA) Festival 2014 yesterday. The festival was opened with the unveiling of three main works, a three-legged horse sculpture Żieme by Austin Camilleri, Power Exchange by JP Azzopardi and Michael Camilleri, and Genesis by Victor Agius.
The work by Austin Camilleri consisting of a statue of a horse with three legs caused some controversy. According to the VIVA Facebook page, the sculpture takes off from a simple premise: the fact that Malta, unlike other countries in northern Europe, has no equestrian monuments. In equestrian monuments, the horse carries representatives of power on its back and hence is somewhat symbolic of power itself. His horse thus refers to Malta’s historic links with other colonial powers, yet its location in front of Valletta’s new Parliament building designed by Renzo Piano supplements it with rich, additional layers of meaning.
The following is a brief interview in Maltese with the artist in which he gives a brief explanation of his work.
https://www.youtube.com/watch?v=107QgGlwlMs
The following video shows the installation of the same work of art at City Gate Valletta, on the night of the 28 August 2014.

Minister Bonnici commented that “this is an exciting time for visual artists in Malta.This first edition of VIVA marks the start of a new epoch where the sector can finally leave its own mark on the local cultural calendar through the means of a festival concentrated totally around the Visual Arts. The huge opportunities VIVA is bringing for international collaborations also bodes well towards the professional growth of all local artists.”
Artistic Director Dr. Raphael Vella also added that “at its inception, the Festival can already boast of an exciting line-up which brings together local and international artists and curators. This shows the great potential for this festival to continue developing from strength to strength in years to come.”
The VIVA programme this year includes a large number of events concentrated around the week of the 1st – 7th September, with most exhibitions and works inaugurated this week being on display free of charge throughout the month of September.
Locations around Valletta include St James Cavalier Centre for Creativity, Heritage Malta (Melita Street), Pjazza Teatru Rjal, and the National Museum of Fine Arts.
Minister Bonnici also brought to light the encouraging response received from the sector following the programme launch of VIVA in June. “The fact that the first edition of the VIVA Curatorial School, to be held in collaboration with the Valletta 2018 Foundation, was extremely well met and will be starting on Monday to a full house of local and international students also shows the health of the sector and its great growth potential.”
VIVA is being co-organised by St. James Cavalier Centre for Creativity, Arts Council Malta, the Valletta 2018 Foundation and Aġenzija Żgħażagħ.
Further information can be found on www.viva.org.mt
[Source: www.independent.com.mt]
Previous
Phoenician shipwreck from 700BC located off Gozo
Next
Karmenu Vella nominated EU Commissioner-Designate for Environment, Maritime Affairs and Fisheries